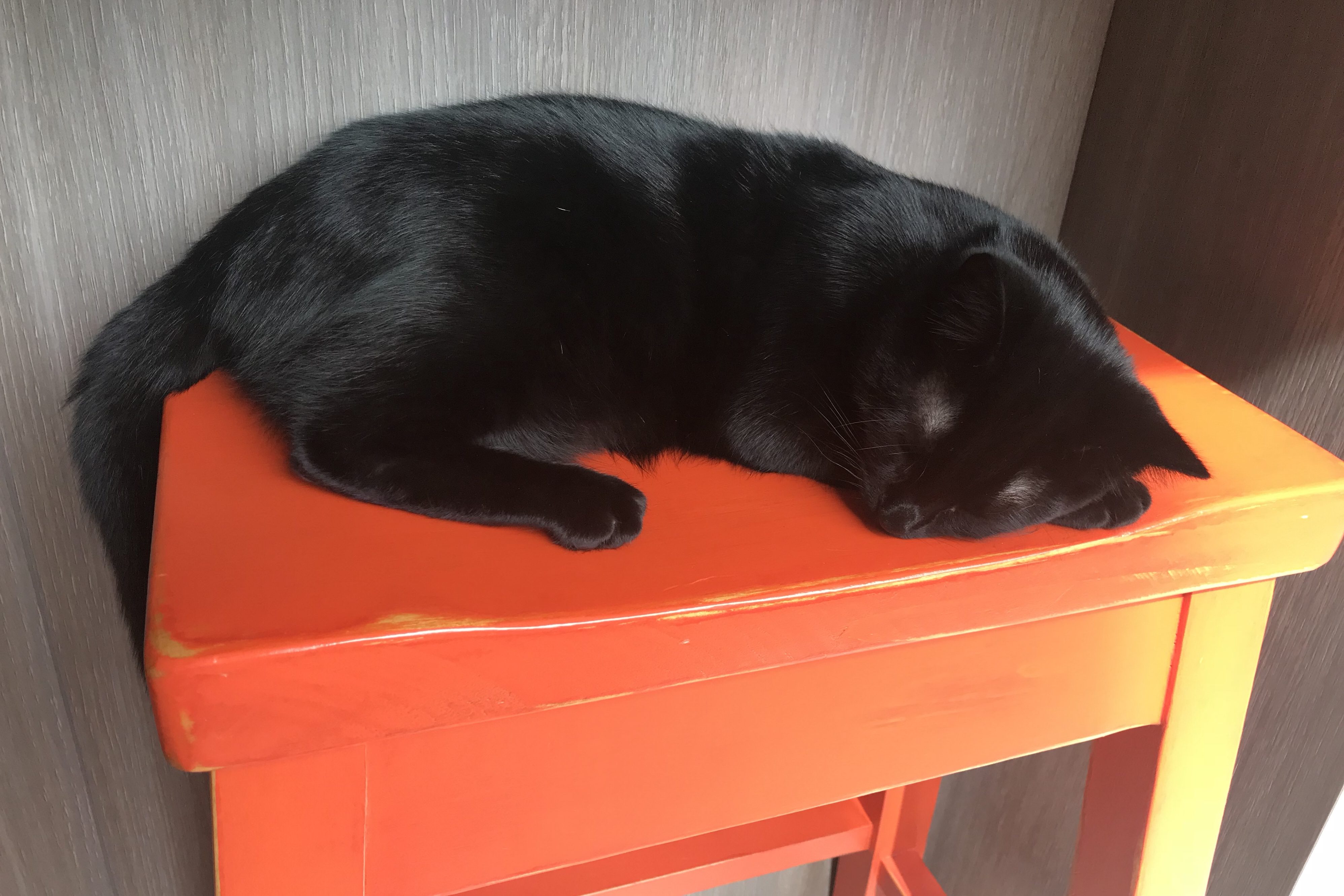 This kitten is trying to kill me.

When Lambert was about 3 months old, Lisa nicknamed her â€œThe Phantom Menace.â€ Even though she was only a few pounds back then, Lambert would pounce into our laps to demand attention. She has grown up so fast, in the way that kittens do. At the vet last week, her weight came to nearly eight pounds. Lambertâ€™s still only about seven months old, so there is still some growing (and poundage) before she stops.

This matters to me a lot. As she gets bigger, some of her once-cute behaviors are becoming more difficult to navigate. Example: Lambert likes to flop around on my arms and on the keyboard when I am typing. She starts on my forearms, splayed across them. Sometimes, she kneads my bicep (odd choice) while oozing closer towards the keyboard. This can be especially dicey for me when typing emails to customers. More than once, Lambert has added some cat-like typing to the message in progress. Proofreading is our friend.

When she was a tiny kitten, Lambert liked to sit on my shoulder while I worked. Last week while I was putting on makeup, she leapt onto my back and clawed her way up to my shoulderâ€¦ sort of. She more draped across my shoulders like a big weird purring stole. Cute, but startling.

The wrist-warming is a fluffy, adorable inconvenience, for the most part. The shoulder-surfing is a bit clumsy but generally harmless. Whatâ€™s much more difficult are the 3AM cuddle progressions.

At about 3AM most nights, Lambert decides it is time for some attention. Right. Now. She cuddles up next to me, first near my feet. Then she moves up to my side, and tries to get my hands to operate to her specification. As I am dead asleep they do not, so Lambert moves further up. She lays across my chest and purrs as loud as a plane taking off, and now Iâ€™m starting to rouse but refuse to budge. That leaves her with no choice but to make sure Iâ€™m paying attention.

So she lays her whole body across my face.

Sometimes, itâ€™s the side of her ribs, poking into my nose. Other times, her soft belly fur tickles my nostrils just before I realize that Iâ€™m cut off from normal breathing.

If youâ€™re thinking, â€œWow, that would be both weird and also upsetting to be smothered in your sleepâ€ – yes. I do not recommend being smothered in any way. Having a cat drape her loudly-purring form across your nose and mouth does not improve it.

I wake up fast, and remove her from my face, but then Iâ€™m awake! And itâ€™s time for cuddles! Nope nope nope.

I try go back to sleep of course, this time hiding with the blankets over the top of my head. Sometimes, I toss her out of the bedroom and close the door. With a little luck, sheâ€™ll grow out of this one. In the meantime, I get my small revenge by waking her up from her many daily naps.